Treasure Hunt - Has the government indirectly admitted that it has lost all hopes of reviving the Indian economy?

Sangrampur (Daundia Khera) is a small village in the Unnao district of Uttar Pradesh. This sleeply village has suddenly hit headlines, when Shobhan Sarkar, a local saint dreamt of 1000 tonnes of gold treasure hidden in a nearby fort. A king by name Rao Ram Baksh Singh was ruling in that region, nearly 165 years back. He had built a fort in that place. He participated in the 1857 war of independence. When British defeated the revolution, they hanged the king to a large tree in the vicinity of the fort. Today fort is in a ruined state. Next to the fort’s ruins is a Hindu temple dedicated to the god Shiva. There have been stories that the king has hidden lot of gold in the fort and its surroundings. Some people have reportedly found some coins near that place. But, it seems, they brought bad luck to the finder and that made the people to stay away! 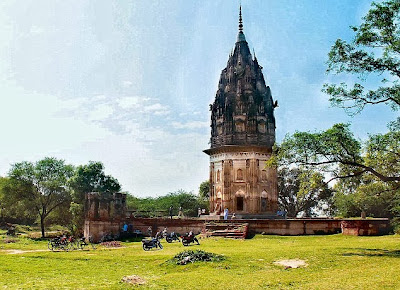 Few days back, Shobhan Sarkar had a dream. In that he saw loads of gold hidden in that fort. He gave information to his disciples and the government also got to know about it. So, the government has asked the Archaeological Survey of India (ASI) to dig the place and take out the treasure!

It is reported that, the godman was concerned by reports about India’s flagging economy and plunging rupee. So, he informed the government, so that it could be used to boost the country's gold reserves and help tackle the deficits. The government has also shown lot of interest and urgency - it has asked the ASI to dig the place immediately! 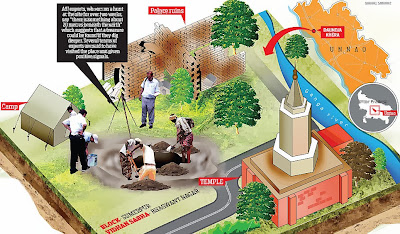 So, this brings a very important question. Has the government indirectly admitted that it has lost all hopes of reviving the Indian economy? Has the UPA brought us down to such a sorry state!? UPA has been in power for last 10 years. It is headed by Dr.Man Mohan Singh, who is an expert in economy and boasts of reviving the economy in 1991. It's finance minister is P.Chidambram, who is famous for his "Dream Budgets". The planning commission chairman is Ahluwalia, who is also an economic expert. With all these people at the helm, the country has reached the brink in just 10 years. So, what is the guarantee that, this treasure (if found) will also not go in the drain!?
Posted by Narendra Kumar at 3:17 PM No comments: Links to this post

Creation of Telangana - What went wrong!?

Telangana creation has witnessed widespread protests and violence. But, this is not the first time a bigger state is getting split. But, this is the first time a non-Hindi speaking state getting split! In the year 2000, the state of Madhya Pradesh was split to form Chattisgargh. Similarly Jharkhand was carved out of Bihar and Uttarakhand was carved out of Uttar Pradesh. When these new states were born, we didn’t see any violence or widespread protests. Also, the economic indicators are showing that the creation of new states has improved the economy of all the regions involved. For example, the table below shows how “Per Capita Income” has changed since the formation of new states:

So, why Telangana is creating so much trouble? What has gone wrong? What should have been done?
Read more »
Posted by Narendra Kumar at 2:35 PM 3 comments: Links to this post

When Narendra Modi speaks, India listens and the numbers at his rallies are a testament to his skill as an orator and leader with a vision. And to his detractors who might have something to say for the multitudes that throng to the grounds to listen to him, here is proof that the crowd comes to listen to the man and not for the alleged ‘freebies’. A Tamil daily carried this short anecdote, which has been translated, post Narendra Modi’s Trichy Youth Conference.

After Modi’s youth conference at Trichy, the very next morning when police were clearing up their mini-control room, they found few boys who were roaming there with bags and they found it to be strange! When police enquired, those boys told them, "Sir, we are from Subramaniapuram in Trichy. Whatever political meeting or conference is held in this ground, we come here on the same night or morning hours to collect the liquor bottles. We get 50 paisa to 1 rupee per bottle when we sell them at scrap shop.We earn Rs.200 to Rs.400 after each such event. Recently when DMK conducted a party meeting, we came here next day morning and we collected around 1500 bottles. Today we are disappointed! We could not find even a single bottle in the whole ground. We went around the ground many times and have searched all the corners. But, we could not find any bottles and we are really disappointed sir!".

Its perhaps incomprehensible for the opposing faction that usually relies on sops to attract a crowd, the fact that the people want to listen to Narendra Modi and no body has to dangle a carrot in front of them. People are even paying entry fee to attend Modi's lectures!!
Posted by Narendra Kumar at 1:06 PM 2 comments: Links to this post

Is Dr|| Man Mohan Singh on the hitlist of Congress!?

In a recent article, M.J.Akbar writes:

"......what is doing fatal damage to Congress is the total disarray within the establishment. Prime Minister Manmohan Singh is being humiliated time and again, not by Opposition but by his own Congress party. The confusion and somersault over the convicted politicians' ordinance, is only one, albeit startling, instance....."

"Rahul Gandhi dismissed the ordinance as complete nonsense.........sounding more like a playground retort than a dispute over high policy. ......., if that is the Congress view, then Manmohan Singh, along with his Cabinet, should resign immediately. Such warfare between a ruling party and its Prime Minister is unprecedented. Rahul Gandhi walked away from a Cabinet decision not when it was made, but when the popular mood turned hostile"

"It is embarrassing to watch the last shards of credibility crumble around a Prime Minister who has been in office for nearly a decade. If Narendra Modi is on top of the Congress hit list, then it seems that Prime Minister Singh is second"

"To take punishment from the Opposition is part of the give and take of democratic politics, but to accept such dismissive barbs from one's own colleagues.....................Dr Singh feels that he should not rock the boat......., but that boat is being tossed into a tornado by his own navigators. There is no government left. What we have instead is a desultory squabble in which no minister can be sure of where he stands, or where he should stand, on any issue"

Text for Header
Powered by LivePerson